Join us for our February virtual #HatcheryNetworking event! Our monthly Hatchery Networking events are a great way to meet entrepreneurs and other members of our community and dig into the big topics impacting the food and beverage industry.

This month we are exploring the delicious world of pizza! Did you know that, according to Datassential, 20% of new restaurants that opened during the pandemic were pizza restaurants? Even though pizza has been an American favorite for decades, chefs and entrepreneurs are still finding ways to bring customers new flavors, formats, and experiences that make them fall in love with this classic dish all over again.

We are excited to host a panel discussion featuring a few of Chicago’s coolest pizza innovators, including  Hatchery residents Five Squared Pizza. This panel will be moderated by renowned pizza expert around town, Steve Dolinsky! 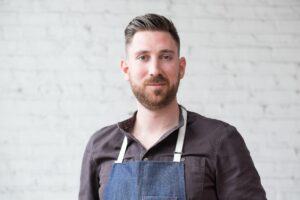 Dan Snowden’s foray into cooking began at the young age of 15, as a prep cook at a fried seafood restaurant in Newburyport, MA. Dan earned his Associates Degree in Culinary Arts from Johnson and Wales in Denver, before moving to Los Angeles where he worked his way up the ranks to sous chef. In 2011, Dan moved to Chicago where he accepted a job at One Off Hospitality’s The Publican, eventually becoming part of the opening team at their acclaimed Italian restaurant, Nico Osteria. In 2016, Dan joined Heisler Hospitality to become the opening and sole Executive Chef at Bad Hunter during it’s celebrated four-year run. In 2018, Dan became a creative partner and spokesperson for Kellogg’s MorningStar Farms brand, developing recipes for national campaigns. And, in 2020, Dan opened Pizza Lobo as executive chef and partner. 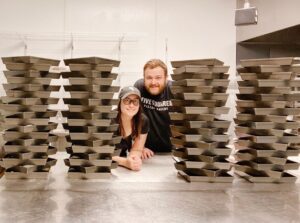 Jenn and Steve Kaplan are the husband and wife duo behind Five Squared Pizza. They left their corporate jobs in early 2019 to follow their dream of owning a food truck! In March of 2020, the pandemic forced them to pivot away from the food truck and towards a cloud kitchen model. The first Five Squared Friday was mid-March and they’ve been growing it ever since. You can place orders via Instagram each week for that week’s Five Squared Friday. 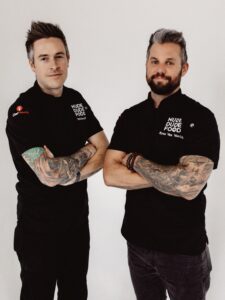 Seth and Ryan have always had a passion for great food.  Starting the experiential private dining and health brand Nude Dude Food four years ago, they had to rethink their business model after private events dried up during the pandemic in 2020.  They decided to go back to their roots, homemade sourdough bread, which they would bake for clients and friends every week.  Using local organic grains, they started experimenting with long fermentations and adding toppings to flatbreads.  Soon thereafter, Nude Dude Food sourdough pizza was born and they’ve been making it ever since.  Their pizza is all about the bread, and they want you to taste the love that local organic grains impart to the hearty crust.  It’s available for pickup and delivery in Fulton Market.

Steve Dolinsky has won 13 James Beard Awards for his TV and radio work.

Currently, he is the Food Reporter for ABC 7 – Chicago. His “Hungry Hound” reports air on the ABC 7 News at 11 a.m. on Fridays and 10 p.m. on Saturdays, covering a range of food and drink-related topics. He is the Co-Creator/Host of “Pizza City” – a bi-monthly podcast featuring some of the greatest pizza makers in the nation. He was also Co-Creator/Host of The Feed Podcast with Chef Rick Bayless (which garnered a Beard award in 2015 for best podcast), a weekly show that ran from 2014 to 2019. He has also written food and travel stories for the Travel sections of the Chicago Tribune and Canada’s Globe and Mail, and was a frequent contributor to Public Radio International’s “The World.”

Steve is the author of “Pizza City, U.S.A.: 101 Reasons Why Chicago is America’s Greatest Pizza Town” (Northwestern University Press). In order to write the book, he visited 185 places in Chicagoland over the course of six solid months of eating. His “Pizza City, U.S.A. Tours” began in May of 2018. Steve has curated four tours throughout the city, each one giving guests a chance to sample four styles of pizza in three hours. There is one bus tour (usually led by Steve) and three walking tours every weekend.